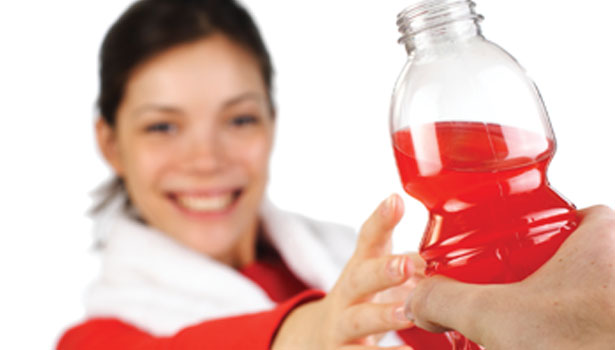 Three novel nutritional ingredients for enhancing and sustaining energy were described by Rodger Jonas, director of national food and beverage sales for P.L. Thomas, in his Prepared Foods’ R&D Seminar titled “Ingredients for Sustainable Energy.” The first, natural vitamin K2 as menaquinone-7 (MK-7), is proving of clinical interest in alleviating muscle cramping and improving aerobic capacity.
VO2 max is a measurement of maximal aerobic power and declines with age. The effect of MK-7 has been studied for its ability to improve VO2. MK-7 (600ug/day) was administered to four trained athletes for 21 days. Results showed that heart rates at aerobic base (AB) and anaerobic threshold (AT) increased significantly, which in combination with noted increases in VO2 max at AB, points to improvement in cardiovascular fitness.  AB is the state of optimum aerobic/mitochondrial respiration, whereby AT refers to the point where the body begins to switch to mostly anaerobic respiration.  From an athletic performance standpoint, the more VO2 at AB, the more watts of work one can perform at those points; the higher the VO2 at AT, the longer one can sustain this workload.
Vitamin MK-7 has shown clinical efficacy through improvement in maximum oxygen utilization at both aerobic base and at aerobic threshold. In combination with marked improvement in the AB and AT heart-rate, these results point to unique mechanisms of action of MK-7 in cardiovascular fitness.
Jonas described the importance of Coenzyme Q10, also known as ubiquinone, in energy production. CoQ10 is a vitamin-like compound involved in aerobic cellular respiration, generating energy in the form of ATP. There are three redox states of CoQ10: fully oxidized (ubiquinone); semiquinone (ubisemiquinone); and fully reduced (ubiquinol). The latter is involved in 95% of the body’s cellular energy production.  Ubiquinol is the most powerful lipid-soluble antioxidant known, protecting cells from free-radical damage. The highest concentration of ubiquinol is found in the heart, where it is essential for maintaining and protecting heart health.
The increased metabolic demands of aging, disease and oxidative stress; insufficient dietary CoQ10 intake; and deficiency of factors required for biosynthesis and conversion; all mean the elderly may have decreased Co Q10 levels, as well as impaired ability to efficiently convert ubiquinone to ubiquinol.
The safety and bioavailability of ubiquinol has been evaluated in single-blind, placebo-controlled studies with healthy subjects, after administration of a single oral dose of 150 or 300mg, and after oral administration of 90, 150 or 300mg for 4 weeks. The C(max) and AUC(0-48 h) derived from the mean plasma ubiquinol concentration-time curves increased non-linearly with dose from 1.88 to 3.19 micro g/ml and from 74.61 to 91.76 micro g h/ml, respectively, after single administration. These results indicate significant absorption of ubiquinol from the gastrointestinal tract, as well as no safety concerns1. Since ubiquinol results in higher plasma concentrations, the body can use it more readily than ubiquinone for cellular energy production and antioxidant protection.
Jonas reported that acute intake of the herb Rhodiola rosea can also improve endurance exercise performance. Research has assessed the effects of oral treatment with extracts from Rhodiola rosea (50mg/kg) and Rhodiola crenulata (50mg/kg) roots on the duration of exhaustive swimming and ATP content in mitochondria of skeletal muscles in rats. Treatment with R. rosea extract significantly (by 24.6%) prolonged the duration of exhaustive swimming, in comparison with control rats and rats treated with R. crenulata. R. rosea extract activated the synthesis or resynthesis of ATP in mitochondria and stimulated reparative energy processes after intense exercise.
These experiments suggest different pharmacological characteristics of R. rosea and R. crenulata: R. rosea is most effective for improving physical working capacity. Other work has determined that R. rosea appears to be a fast-acting adaptogen exhibiting durable beneficial systemic effects, with biological effects that do not diminish over time. Jonas also noted the herb may improve several functions of the central nervous system, including learning, memory, mood, appetite regulation and circadian rhythm.
“Ingredients for Sustainable Energy,” Rodger Jonas, director National Food and Beverage Sales, P.L. Thomas, 973-984-0900, ext. 246, Rodger@PLThomas.com, www.PLThomas.com
--Summary by Kelley Fitzpatrick, Contributing Editor
References:
1. Hosoe K, et al. 2007. Study on safety and bioavailability of ubiquinol (Kaneka QH) after single and 4-week multiple oral administration to healthy volunteers. Regul Toxicol Pharmacol. 47(1):19-28.
2. Abidov M, et al. 2003. Effect of extracts from Rhodiola rosea and R:hodiola crenulata (Crassulaceae) roots on ATP content in mitochondria of skeletal muscles. Bull Exp Biol Med. 136(6):585-7.
KEYWORDS: rhodiola