Operators Defy a Year of Challenges

The foodservice industry grows despite a bevy of economic, competitor and  consumer hurdles

Foodservice in the US continued to grow in 2016, with the total industry slightly outperforming the Top 500 chains in terms of sales growth, according to Technomic Inc.’s “Top 500 Chain Restaurant Report.”

Further, shifting consumer demands significantly contributed to industry performance. While some restaurant brands catered to today’s leading trends, others were unable to keep up with the swiftly evolving foodservice landscape and lost traffic as a result. Let’s take a deeper dive into Top 500 segment and menu category performances to see which channels saw success and which missed the mark in appealing to guests. 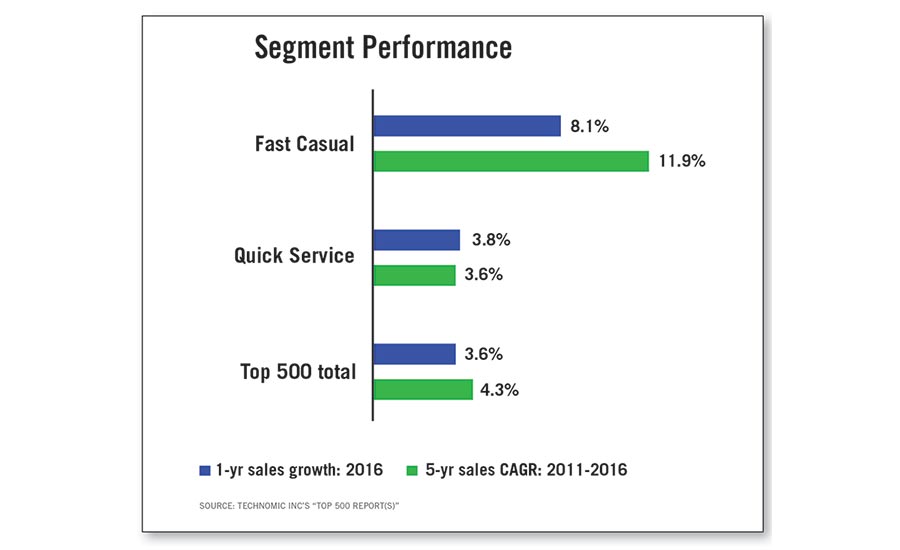 Top 500 limited-service chains experienced a moderate slowdown in 2016, dropping from 5.7% sales growth to 4.5%. This is partially the result of the fast-casual segment maturing and slowing its previously rapid unit growth. Meanwhile, a few major quick-service chains, most notably Subway, also slowed their new unit development.

Although fast casual continued to be the fastest growing segment, with more than 8% sales growth in 2016, it slowed considerably from its five-year compound average of 11.9% growth, and dipped under double-digit annual growth for the first time in recent memory. However, this was mainly due to the struggles of Chipotle, the second largest fast-casual chain in terms of sales volume, which saw its sales growth fall by more than 13%.

Asian/Noodle led limited-service menu categories, in terms of sales growth, at 10.7%. The success of this niche category can mostly be attributed to leader Panda Express, but solid sales growth also came from Waba Grill, Noodles & Company and Yoshinoya. The Asian/Noodle category’s strong performance represents growing consumer interest in more specialty-focused brands, as well as the continued appeal of ethnic cuisines.

Burger, the largest limited-service menu category by both sales volume and unit count, grew by 2.7%. Driving growth was the improved performance of fast-food giants like Arby’s and McDonald’s, the latter of which relied on refranchising company-run restaurants and launching an all-day breakfast platform to turn around lagging same-store sales. Forward-looking growth strategies for the brand are centered on delivery service, automated technology and better ingredient sourcing. Beyond McDonald’s, the burger category also was lifted by fast-casuals, such as Shake Shack (sales up 40%) and The Habit Burger Grill, the fifth-fastest growing, limited-service chain in the Top 500—with 26% sales growth.

Pizza, the second-largest limited-service menu category by sales volume, grew by 6.8% overall. Success came from major quick-service players, like Domino’s and Marco’s Pizza, combined with the notable growth of fast-casual pizza chains such as Blaze Pizza and MOD Pizza. Operators in this category have remained relevant with consumers by rolling out buzzworthy LTOs, such as Your Pie’s seasonal Chicken & Waffle Pie pizza; extending pizza innovation onto morning menus; and showcasing convenience and value with bundled deal and delivery-time promises.

Growth of the Frozen Dessert and Mexican categories were much smaller, at 1.5 and 0.9%, respectively. Food-safety concerns from heavyweight Chipotle were a detriment to the Mexican category’s performance, whereas Frozen Desserts’ largest declines came from Pinkberry and Red Mango.  These two brands’ popularity skyrocketed during the tart frozen yogurt fad several years ago but have since lost momentum, as designer cupcakes and doughnuts came more into vogue.

The only category to register negative growth was Family Casual, comprised mostly of buffet-style chains like Golden Corral and Old Country Buffet/HomeTown Buffet. It continues to struggle with an ability to offer the quality of food and dining experiences that today’s consumers seek and is, in turn, losing traffic to fast casuals that also offer build-your-own meal experiences. 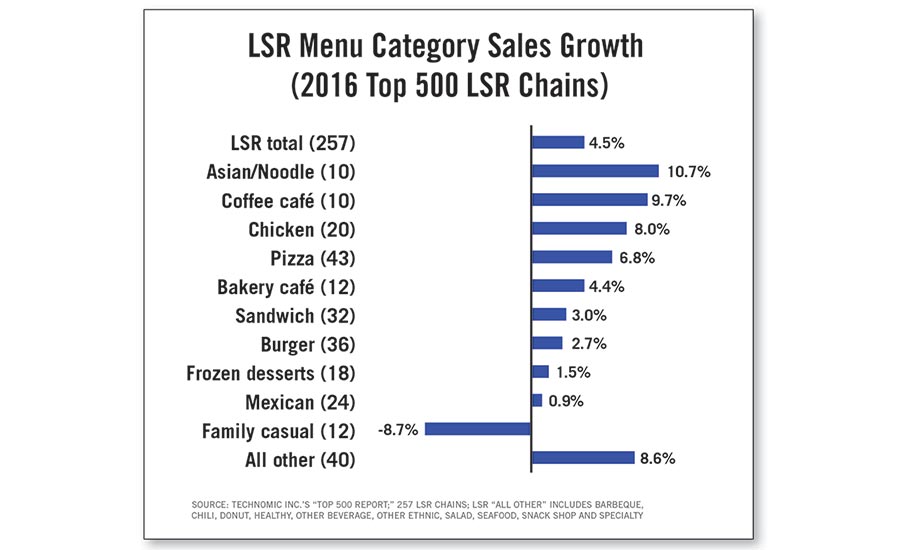 Although 2016 growth was positive for full service, the rate of growth from 2015 declined to just 1.4%, due to key players such as Applebee’s, Chili’s Grill & Bar and Buffalo Wild Wings experiencing sales slowdowns.

Specific menu categories deeply affected the performance of full service, some for the better and others for the worse. Like limited service, the relatively small Asian category was the fastest growing menu type, with sales growth of 4.3%. Much of this growth was driven by newcomer global chains BonChon and Little Sheep Mongolian Hot Pot, which originated in South Korea and China, respectively. These international concepts offer guests authentic tastes from far-flung regions of the world, an attribute that appeals to 60% of consumers, according to Technomic’s “Flavor Consumer Trend Report.”

Another success story was Sports Bars at 4% growth, led by brands such as Dave & Buster’s, Twin Peaks and Duffy’s Sports Grill. These dining destinations target consumers with craveable pub fare, such as burgers and wings, paired with an overall sports-focused atmosphere. The booming interest in craft beers also has helped drive traffic to these restaurants. While this menu category outperformed full service overall, many of these brands are looking to new or expanded off-premise services and new fast-casual spinoffs or investments for future growth opportunities.

The category bearing the most weight on full service’s growth was Varied Menu, the segment’s largest menu category by both sales volume and count. The category’s minimal growth of 0.2% significantly shifted full service’s growth average downward. Three of the category’s top five brands by sales—Applebee’s, Chili’s Grill & Bar and TGI Fridays—posted year-over-year sales declines, while other major brands in this category, such as Ruby Tuesday and O’Charley’s, followed suit. Much of this traffic has been lost to fast casual, a segment that is able to fiercely compete with full-service, varied-menu operators on providing quality, value and convenience.

Forecasting for the Future

Real growth for limited service is projected at 2% in 2017, while full service will remain flat at 0.2% growth, according to Technomic. Interest in specialty and ethnic categories, such as Asian, will drive much of these dining occasions. Expect to see fast casual pick up even more share over the next few years, as consumers continue to trade-up from quick service and down from casual dining. At the same time, quick- and full-service operators will amp up their efforts to appeal to consumers by rolling out more interactive technologies, off-premise services, value-driven deals and quality, freshly prepared meals.

Originally appeared in the August, 2017 issue of Prepared Foods as Operators Defy a Year of Challenges.

Laura McGuire is editorial manager at Technomic Inc. For more information about Technomic industry data, please contact Patrick Noone at Technomic at 312-506-3852 or pnoone@technomic.com.

Firmenich Flavors of the Year for 2021: A Super-Root, Ginger and a Super-Fruit, Yuzu