This website requires certain cookies to work and uses other cookies to help you have the best experience. By visiting this website, certain cookies have already been set, which you may delete and block. By closing this message or continuing to use our site, you agree to the use of cookies. Visit our updated privacy and cookie policy to learn more.
Home » Cereals Embrace Nostalgia, Snacking; Bars Power Up
Breakfast, Cereals & Bars
Retail State of the Industry | Cereals & Snack Bars

If there really is a “war on sugar” taking place in the food industry, somebody forgot to tell breakfast cereal makers.

Last year brought a dizzying array of new presweetened products as cereal makers doubled down on sweet offerings to capitalize on snacking behavior and nostalgia.

Cereal makers are reacting to market changes. According to Nielsen, sales of adult cereals dropped 7% in 2017 while sales of children’s cereals (including presweetened varieties) dipped by only 1%. This split set the stage for presweetened innovation.

General Mills also added a Chocolate flavor and a Magic Unicorn Marshmallow flavor to its Lucky Charms line. Kellogg followed suit with a Vanilla Latte flavor of its Kellogg‘s Frosted Mini Wheats, a Wild Berry flavor of Kellogg’s Fruit Loops, and a Maple flavor of Cheerios Cereal. Even “better for you” brands like Kashi went sweet with Cocoa Crisp Organic Cereal, a chocolate-flavored offering that features chickpeas as an ingredient.

On the spice front, cinnamon was the top dog for General Mills Cheerios Oat Crunch Cinnamon Cereal while turmeric highlighted Nature’s Path Golden Turmeric Organic Cereal. Turmeric turned out to be one of 2018’s breakout superfoods. In cereal, the spice helps milk turn a gold color for a new twist.
Generally speaking, “better for you” functional cereals took a back seat to presweetened offerings in 2018, though the year may eventually be remembered for the launch of Kellogg’s Hi! Happy Inside Cereal for Digestive Wellness, a granola-type cereal.

Happy Inside is not only high in probiotics and fiber; it is also rich in prebiotics. But will that resonate with consumers? Survey research indicates awareness gaps that could be a heavy lift for Kellogg. According to a recent Harris Poll of over 2,000 U.S. adults, 29% said they know about probiotics, but just 15% say they know about prebiotics.

Granola cereal itself has been trending as it tends to be more versatile than other types of cereal, making it suitable for a wider range of usage applications. Granola is great for snacking, as a topping for yogurt and ice cream, or served in the traditional manner. 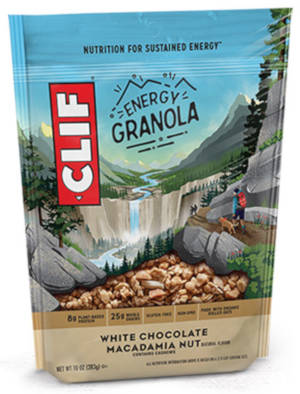 One noteworthy trend in granola has been a move away from grain. Baobab-infused Effi (Eco Friendly Foods Initiative) Probiotic Chickpea Granola Clusters break new ground with what is said to be the first legume-based granola. Chickpeas contain both soluble and insoluble fibers that help improve gut health.

Nature’s Path Grain Free Granola in flavors like Vanilla Poppy Seed is “Paleo friendly,” referencing the increasingly popular Paleo diet. The product is one of the first granolas to claim to be sweetened with coconut sugar, a newer and more natural type of sugar now trending in the natural and organic space.

Picking up packaging tips from oatmeal, granola went the single-serving route with Goh-Goh Cereal Granola in cups for on-the-go consumption. But what really separates this one from the pack is its air-dried whole milk ingredient, enabling one to enjoy the product hot or cold simply by adding water.

Convenience also drove hot cereal innovation. GF Harvest Oatmeal in a “GoPack” paper pouch ships flat, but folds into a cup for a quick and easy breakfast. Mush Overnight Oats comes in a rectangular tub complete with its own spoon under the lid for an on-the-go breakfast or snack.

GRANOLA CEREAL ITSELF HAS BEEN TRENDING AS IT TENDS TO BE MORE VERSATILE THAN OTHER TYPES OF CEREAL, MAKING IT SUITABLE FOR A WIDER RANGE OF USAGE APPLICATIONS. GRANOLA IS GREAT FOR SNACKING, AS A TOPPING FOR YOGURT AND ICE CREAM, OR SERVED IN THE TRADITIONAL MANNER.

Wild Friends Nut Butter Oats was able to tap growing interest in alternative nut spreads by packaging a plastic sachet of “super butter” on each lid of its plastic cups for a new mix-in flavor experience. Almond Cashew and Peanut Blueberry were flavor highlights.

Snack bars saw a flood of innovation in 2018, but growth varied widely by segment. Breakfast and cereal bars led the growth parade, with dollar sales up 9% for the 52-week period ended October 7, 2018, per Information Resources, Inc. Nutrition and health bar sales were up 3.5% over the same period while granola bar sales fell around 3%.

The top innovation theme in bars was protein. Everyone’s favorite macronutrient is forcing category leaders like General Mills to adjust. The company launched Protein One Protein Bar “by the makers of Fiber One” during the year, offering a “trifecta of calories, protein, and sugar” wrapped in a “hook of permissibility.”

General Mills has been stung by the rise of protein in the bar space. The firm’s U.S. snack bar sales dipped 5% in the first half of 2018, a performance the company blames on slowing sales of its Fiber One bars.

Protein One will contend with new challengers including J.M. Smucker’s Jif brand. The latter’s Jif Power Ups Chewy Granola Bars are packed with peanuts and granola, featuring “the taste kid’s love” in flavors like Chocolate with Peanut Butter.

Kid-friendly bars offer an on-ramp for new consumers. ThinkKIDS Protein Bars from ThinkThin claim to be a good source of protein for kids, but with 45% less sugar than usual. Kind Kids Chewy Granola Bars may not be high in protein, but they are gluten-free and “have 25% less sugar than the leading kids granola bar.”

Novel protein sources offered a change-of-pace. Ancient Nutrition Bone Broth Superfood Protein Bar debuted as the “first bone broth protein-inspired bar range on the market” in flavors like Salted Chocolate Almond. Oskri 3 Egg Whites Protein Bar not only uses egg whites as an ingredient, but is gluten-free and suitable for the Paleo diet.

The Paleo diet itself is changing the face of innovation in snack bars and it is no wonder, given its popularity. According to the International Food Information Council Foundation’s 2018 Food & Health Survey, 7% of Americans said they follow the Paleo diet.

Going in almost the complete opposite direction was Kellogg with its Special K Protein Snack Bar in a Caramel Pretzel Cashew flavor. Pretzels not only add a crunchy texture to snack bars, but also position snack bars as a savory snack alternative. Also emphasizing a crispy texture were Quaker Breakfast Flats Crispy Snack Bars in a Blueberry Nut flavor.

Originally appeared in the July, 2019 issue of Prepared Foods as Sweet Dreams.

Innovation in the Bakery Category Balances Health and Indulgence

Cereals and Bars Expand and Diversify

A Healthy Start with Cereals and Bars