Fluid Situation: Many leading restaurant chains are jumping on the plant-based bandwagon when it comes to milk alternatives

Plant-based milk alternatives have been around for many decades. Primarily, they’ve come in the form of soy and almond milks and have been mostly consumed by a “crunchy” crowd of consumers. In the past few years, however, retailers and restaurants alike have seen a swift rise in nut milks, coconut milk and most recently, oat milk. These growing options are all tied into greater consumer demand for plant-based alternatives.

Many of the leading restaurant chains are only just now jumping on the plant-based bandwagon when it comes to milk alternatives. These operators are rolling them out quickly across several parts of the beverage menu—particularly as ingredient options in cocktails, smoothies, coffees and espresso-based drinks. Mintel research shows that there has been a +208% increase in the number of menu mentions of oat milk and +133% increase in almond milk mentions from the fourth quarter of 2016 to the fourth quarter of 2019. 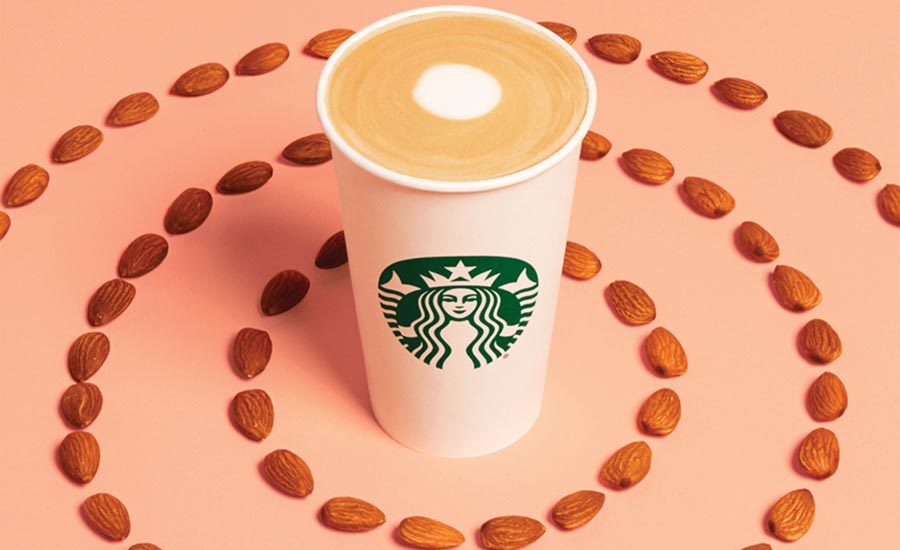 Starbucks Corp. greeted 2020 with three new plant-based beverages, which are some of its first dairy alternative options since 1997, when it debuted a soy chai tea latte and soy cappuccino.

The first new Starbucks beverages of the decade feature these plant-based milk alternatives with the arrival of the Almondmilk Honey Flat White and Coconutmilk Latte. The beverages joined the permanent menu in stores in the United States and Canada starting January 7 as part of a new winter food and beverage lineup. In conjunction, Starbucks introduced a regional Oatmilk Honey Latte arrives in select U.S. markets in the Midwest.

In an online news release, Starbucks Communications Program Manager Heidi Peiper noted that the company added coconutmilk to its lineup in 2015 and almondmilk in 2016. The company’s Research & Development team also began creating new beverages to highlight the flavors of the non-dairy milks like Coconutmilk Mocha Macchiato and Horchata Almondmilk Frappuccino blended beverage.

Jill Failla is a Mintel Foodservice Analyst. Readers may contact her at jfailla@mintel.com.