This website requires certain cookies to work and uses other cookies to help you have the best experience. By visiting this website, certain cookies have already been set, which you may delete and block. By closing this message or continuing to use our site, you agree to the use of cookies. Visit our updated privacy and cookie policy to learn more.
Home » Flours and Starches Derived from Ancient Grains Growing in Popularity
2022 Food and Beverage TrendsFlours, Grains & Pasta
2022 PREDICTIONS | FLOURS & STARCHES

Flours and Starches Derived from Ancient Grains Growing in Popularity

Flours on the Rise: Baked and extruded formulations are benefiting from new flours and starches.

A comprehensive selection of flours and starches derived from ancient grains and seeds is increasingly being tapped for products that appeal to consumers seeking foods that are gluten-free or non-GMO, or simply have more healthful profiles. Examples of sources range from amaranth, millet, sorghum, and teff to chia, hemp, and quinoa.

Millet has been making a strong showing of late in North American products. As the world’s sixth most abundant grain crop, it is finding its way into gluten-free bread, flatbreads (including tortillas and roti), crackers, pancakes, and muffins. It is favored for its light color and mild flavor, plus its high soluble fiber content helps tenderize texture and lower glycemic impact. 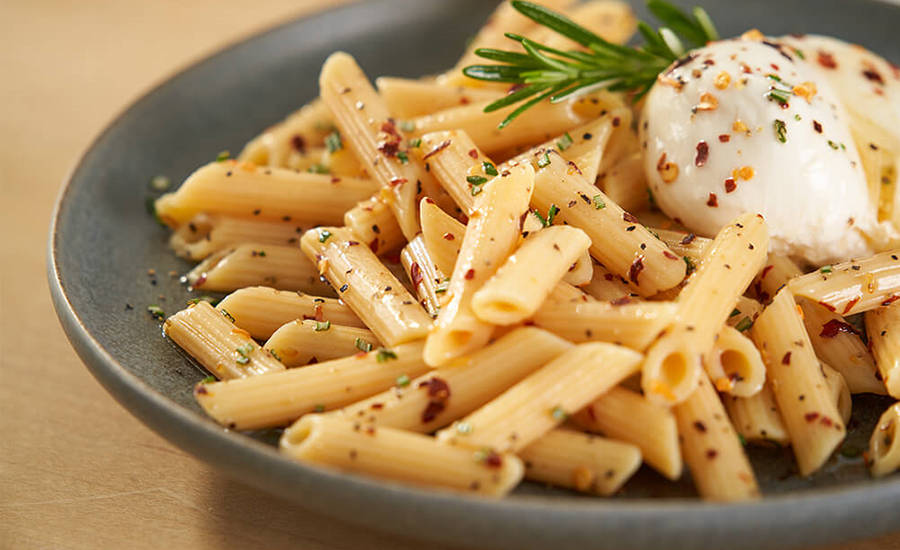 Technologists have perfected flours from peas and other legumes to a level where one-to-one replacement for wheat flour in many formulations is possible. PHOTO COURTESY OF: ZENB US, Inc.

Polyphenolic compounds in millet flour help make it hypoglycemic by inhibiting alpha-glucosidases and pancreatic alpha-amylase, while its proteins and lipids interact with the starch to increase its resistance to digestion and breakdown during cooking and baking.

Barley and sorghum are two flour sources that are continuing to trend, not only due to the shift toward whole and ancient grains but also on the coattails of global cuisine. One of the oldest cultivated grains, barley has always been popular in Europe. Processors seeking to leverage unique characteristics of various flours to create vibrantly colored products are attracted to barley for a number of reasons. It has robust flavors and textures, and ancient varieties such as red, black, and purple barley add complexity of flavor and color alongside a hint of the exotic.

Barley boasts complex carbohydrates, slow digestibility, fiber-like resistant starch, and beta-glucans, all of which help lower the glycemic impact of baked goods without losing their characteristic elasticity and chewiness. The purple hull-less varieties are rich in anthocyanins and phenolic compounds, not only raising the antioxidant value of products made with them but further lowering the net glycemic index.

Sorghum flour owes its surge in popularity to being a light-colored, neutrally flavored, nutritious substitute for traditional flour in gluten-free recipes. Because it lacks gluten, sorghum flour is typically blended with binding agents such as xanthan gum, egg whites, gelatin, collagen, or guar gum. It also can be blended with starches from chickpeas, corn, rice, and tapioca. Black sorghum (“onyx”) flour has a characteristic dark red or black color that adds rich hues to baked goods, such as red velvet cake, pumpernickel bread, and chocolate cakes, muffins, and cookies.

While the nutritional impact of whole grains continues to be the draw, the industry’s understanding of whole grains and use of new processing technologies to transform and further concentrate their nutritional benefits is taking center stage. Take Two Foods, LLC, uses “rejuvenated barley” flour—milled spent barley from beer brewing—to make a flavorful plant-based milk alternative with complete protein, fiber, calcium, and healthful fats, but with half the sugar of many other plant-based milks.

A number of flours from uncommon sources are hitting the market and bear watching. Acorn flour, made from the nuts of the mighty oak tree, has remarkable nutritional and functional attributes, including high levels of protein, potassium, magnesium, calcium, vitamin B6, and fiber. Gluten-free, its functional properties make it suitable for enhancing structural, nutritional, and sensory characteristics of gluten-free baked goods.

Legume-derived flours, especially from peas and garbanzo beans (chickpeas) also are continuing their upward climb in use by bakers and pasta makers. New processing technologies are emerging to transform seeds and beans into flours used to recast consumer favorites with significantly greater nutritional value. These flours are now widely used as key ingredients in gluten-free versions of noodles and analogs of meat and dairy.

A recent entry into that channel is the innovative ZENB US, Inc.’s new pasta line. The pastas, made from whole pea flour, meet consumer expectations for traditional pasta flavor and texture, yet provide 17g protein, 11g fiber, and 30% fewer net carbs than traditional durum wheat pasta per 3oz serving.

Other advances in pea flour include a recently launched version that contains only 11% protein, placing it on par with wheat flour, falling between the average 9-10% protein in white wheat flour and 13% in whole wheat. The fact that whole pea flour can be used as the sole ingredient to replace durum wheat semolina speaks volumes about the versatility of the multifaceted ingredient and the process used to make it into extruded products such as pasta.

Wheat gluten provides texture, crumb, crust, and color, mouthfeel, flavor, volume, and slow staling. Few flours can match as many of these attributes. However, acorn flour can when used at 25-50% levels in gluten-free breads, cakes, and pie crusts. When combined with buckwheat, rice, potato starch, and other typical gluten-free ingredients, acorn flour can support the texture, volume, color, overall quality, and visual appeal of products. Acorn flour must be specially processed to remove its high tannin content.

Other unusual flours and starches entering the market are those derived from fruits and vegetables. A range of advanced drying technologies coupled with careful milling are able to preserve various sensorial and functional attributes for which the original fruit or vegetable is valued.

Cauliflower is perhaps the best example, bursting onto the scene in pizzas, tortillas, muffins, pastas, and baked goods. Recently, its cousin, broccoli, also entered the farinaceous limelight. Flour from broccoli stems can provide all the nutritional and functional attributes of cauliflower, without its strong taste and aroma.

Several brands of broccoli pasta are now available in supermarkets, and a number of foodservice and commissary operations are using as much as 30% broccoli flour in keto-friendly coatings, breadings, waffles, and pancakes. Sharing in this green revolution, kale and spinach flour are appearing in tortillas and flatbreads as replacements for up to 20-40% of the base wheat or corn flour.

Dried carrot waste from carrot juice extraction yields another vegetable flour that offers not only bulk but vitamins K, C, and A (beta-carotene); fiber; and minerals such as potassium. This ingredient has been especially popular in sauce and paste applications. Flours and starches from roots like yam and beet offer a naturally sweet, nutrient- and color-rich option for gluten-free and vegan applications, as well as teething biscuits and other nutritious foods for infants and toddlers.

Functionality influences the choice of flour or starch for a product, but a functionality that makes an ingredient perfect for one application may pose a challenge for another. Processors can find success in working with ingredient suppliers and millers to find new and different sources for their formulations that spell success in function and flavor.

The Latest on Current Sources, Future Applications of Gums & Fibers

Kantha Shelke, PhD, CFS, is a senior lecturer at Johns Hopkins University and principal of Corvus Blue LLC, a Chicago-based food science and research firm specializing in industry competitive intelligence, expert witness services, and new product/technology development and commercialization of foods and food ingredients for health and wellness. Contact her at kantha@corvusblue.net.